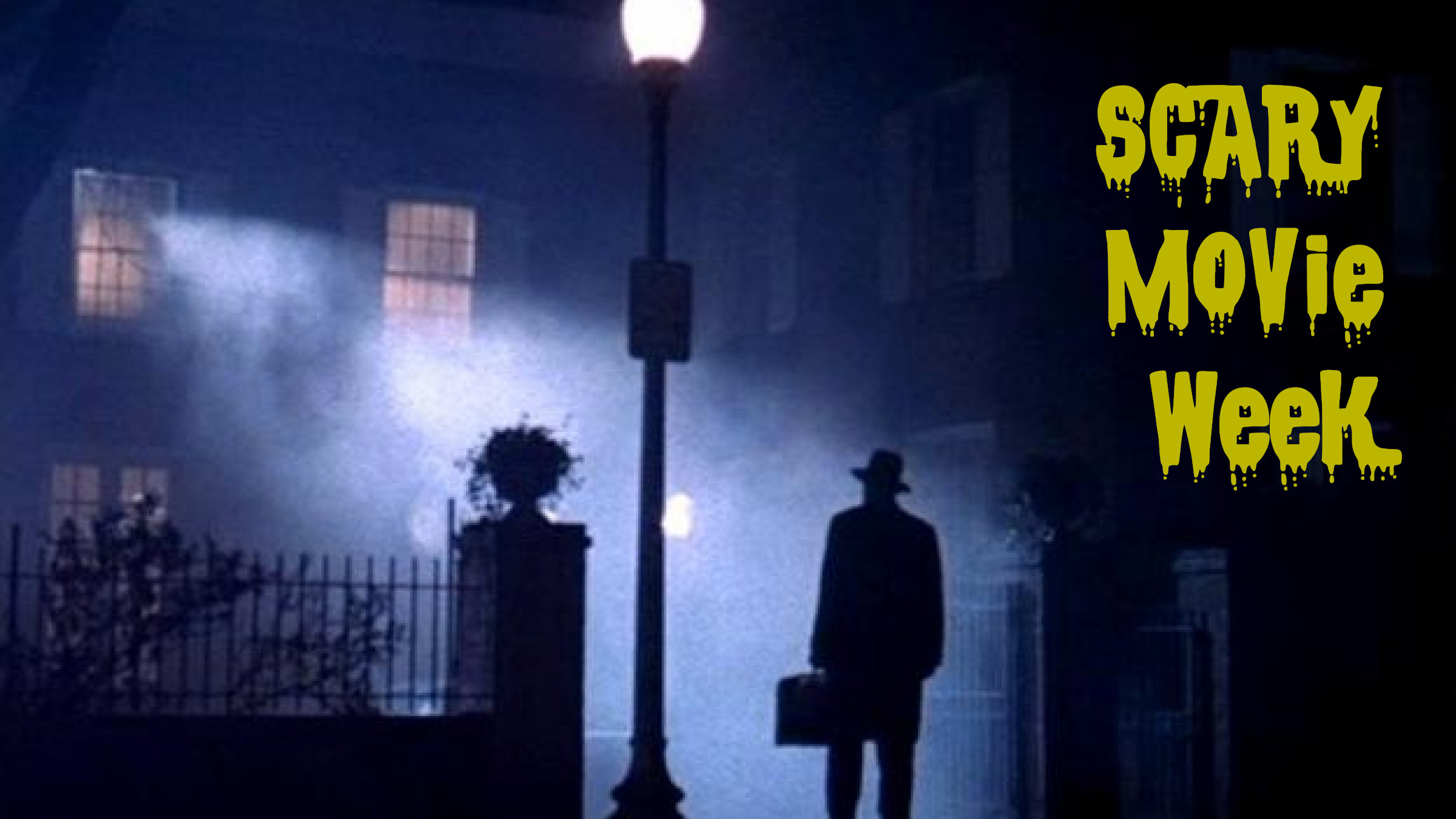 Last week was our final week in Classic Hollywood. From here on out, it gets a little more specific.

Scary movies are as old as cinema itself. Some of the very first things put on film were designed to terrify people.

We're going to do things a little differently this week, though.

Because, while a lot of people LOVE horror movies, I am not one of them.

The problem is that I have a very strong aversion to blood. Like, a get-queasy-and-nearly-throw-up aversion to blood. Plus, my wife is deathly afraid of zombies, so we tend to avoid movies that feature a lot of that. Ergo, we're not a big fans of the genre.

Still, the show must go on!

Is Abbott and Costello Meet Frankenstein more a comedy than a horror movie? Yes. Are there 8 year old kids doing this? Also yes.

If you're unfamiliar with Bud Abbott and Lou Costello, let's start there. Ask your grandparents.

"Who's on First" is one of the most famous comedy routines in history. Naturally, Hollywood came calling.

In this one, they meet Frankenstein's monster, but also the Invisible Man, Count Dracula, and the Wolf Man. It's ridiculous, but also delightful.

Effectively, Abbott and Costello Meet Frankenstein is two films jammed into one. There's the plot-heavy film that's an extension of the previous Frankenstein films and the parallel Abbott and Costello comedy that just happens to be occurring on the same sound stage. In reality, they have little to do with each other, save for some forced machinations added to justify the mash-up, but the strange thing is they work together.

Most of the Frankenstein films, save for Bride of Frankenstein [1935], tend to be stretched rather thin, as do some of the Abbott and Costello films. So, to combine them into one film is to ensure neither half of the equation is forced to carry more of the film than it can handle. Who cares that there doesn't seem to be any reason for them to be in the same film? They compliment each other well, and at the end of the day, that's all that matters.

Night of the Living Dead

I'm a big believer that if you're going to watch the 8,000 zombie movies that come out every year, you should probably start at the source. This is the source.

Romero's film is widely considered the first modern zombie film, although 1932's White Zombie would like a word.

Night of the Living Dead was shot outside of Pittsburgh for a little more than $100K and you can definitely tell. Still, the impact was significant.

The kids in the audience were stunned. There was almost complete silence. The movie had stopped being delightfully scary about halfway through, and had become unexpectedly terrifying. There was a little girl across the aisle from me, maybe nine years old, who was sitting very still in her seat and crying ... It's hard to remember what sort of effect this movie might have had on you when you were six or seven. But try to remember. At that age, kids take the events on the screen seriously, and they identify fiercely with the hero. When the hero is killed, that's not an unhappy ending but a tragic one: Nobody got out alive. It's just over, that's all. (Roger Ebert)

Variety (you know, the Hollywood trade magazine) thought the Supreme Court should get involved, calling it "pornography of violence".

Naturally, it was a hit.

William Friedkin was nominated for an Oscar for directing this religious thriller about a possessed 12-year-old girl and the priests that try to save her.

You would think the Catholic Church would have been livid, but they weren't.

“Most of the people at the highest levels of the church accepted it totally because the Roman Ritual of Exorcism is still in the New Testament,” said Friedkin. The director claims church officials later told him they credited the film for inspiring new applicants to be priests and nuns.

After all, the priests are the heroes of the story. And the message of the film is that there are some matters of the soul that science and medicine can’t fix.

“The Cardinal in New York preached about it from the pulpit and said great things about it,” Friedkin recalled. “The guy who was the head of the Jesuit order at the time, Father Pedro Arrupe, who was headquartered in Milan, he had his own print of it and would show it to his fellow priests and bishops and cardinals.” (EW)

That EW link is full of really interesting tidbits, as is this from No Film School.

And here's a look at the filming and cultural impact.

Is The Shining a masterpiece by one of the greatest filmmakers in the history of film? Yes, absolutely.

Is it Stanley Kubrick's best film? Probably not.

TheyShootPictures.com, the nerdy-as-hell website with an extensive ranking of the top 1,000 films in history, based on a TON of critics (including yours truly), has 11 Kubrick films in the top 1,000 and 5(!) in the Top 100. They list Kubrick as the 3rd best director in history, behind Orson Welles and Alfred Hitchcock.

The consensus is that The Shining is behind 2001: A Space Odyssey and Dr. Strangelove or: How I Learned to Stop Worrying and Love the Bomb in the Kubrick rankings and then it's a question of preference.

He's really good, I guess is the point.

Kubrick was a perfectionist in the highest order. There's a conspiracy theory that NASA hired him to fake the Moon Landing and the joke is that he agreed to do it, but insisted that they shoot it on location.

Of all Kubrick's films, The Shining is the one that invites the most controversy and crazy theories. People think it's an admission that he did indeed film the Moon Landing.

Anyway...The Shining is based on a Stephen King novel and is about a writer (Jack Nicholson) who signs on as a winter caretaker for a hotel.

Obviously, this is an amazing job for a writer.

Nicholson is fantastic in this career-defining role. How this wasn't one of his 12 Oscar nominations is beyond me (he would have lost to Robert De Niro, but still). How the film wasn't nominated for a single Oscar is beyond me.

The Shining is terrifying and mystifying and stunning. As you move through cinema, it's one of the films you absolutely have to watch. Then, after you've watched it, make sure you watch Room 237, a documentary about all the hidden meanings in The Shining.

It's really good, even if there is a lot of blood in this trailer.

Gruesome in an over-the-top way, Evil Dead II is largely considered the best film of the Evil Dead franchise.

By contract, Sam Raimi was obligated to produce a R-rated cut of the film, but that seemed unlikely. In fact, it didn't go well at all. When they presented the film to the studio, they quickly realized the film would get a X rating from the MPAA and in order to get an R, it would end up being about 60 minutes long. So they created a shell company that would be allowed to release the film unrated.

The film went on to become a cult classic.

It's a unique production in that it's not exactly a sequel and it's sort of a remake. Basically, they called it a sequel, but they more or less made the movie they would have made the first time around, if they had more than the $90K it cost.

Here's an oral history of the production.

Shaun of the Dead

A theme in horror you see over and over again is the value of humor. Laughing is a reaction that works well with a scream. In a way, they're reverse versions of each other (see also: crying). But often, the most effective scares are the ones set up with a joke.

In film, the relationship is even tighter. After all, a cinema is built around timing and tension, but no two genres play with the sense of build-up and release with such similar structure as horror and comedy. Whether it’s a scare set-piece or a great comedic bit, horror and comedy operate on pinpoint execution of mounting tension, precision timing, and ultimately, big payoff. In comedy, the payoff is a laugh. In horror, it’s screaming, jumping and wincing. But in a great horror-comedy, it’s both; a heady combination of physical and mental reaction that can make the scares scarier and the humor even funnier.(Collider.com)

Shaun of the Dead is a parody of all those zombie movies. Simon Pegg and Nick Frost play a couple of lazy blokes who find themselves in the middle of the zombie apocalypse.

But don't worry. They have a plan.

Since its release 15 years ago, “Shaun of the Dead” has gained a cult following, and deservedly so. Ultimately, “Shaun of the Dead” is less a critique of the zombie apocalypse genre  than a comedic hyperbole of the genre’s most salient elements. In fact, you could say “Shaun of the Dead” has its brain and eats them, too. It both laughs at and honors the zombie apocalypse movie, resulting in an oxymoronic film that is hilariously violent and violently hilarious. Even after 15 years, the humor in “Shaun of the Dead” stays fresh and relevant because it doesn’t rely on dated references or cheap jokes. Instead, Wright’s gags rely on an interplay between visual and auditory elements that are more sophisticated and enduring. Wright’s comedic style is wholly his own — it’s not chained to a dated zeitgeist. It’s the same reason why people still love “Star Wars” after 40 years — what makes an artistic work stand the test of time lies in its ability to provide a unique insight on the human condition in all of its drama, tragedy or even comedy. (Megan Liu)

Most importantly, the Shaun of the Dead plan can be used to stay safe in other massive public health emergencies.