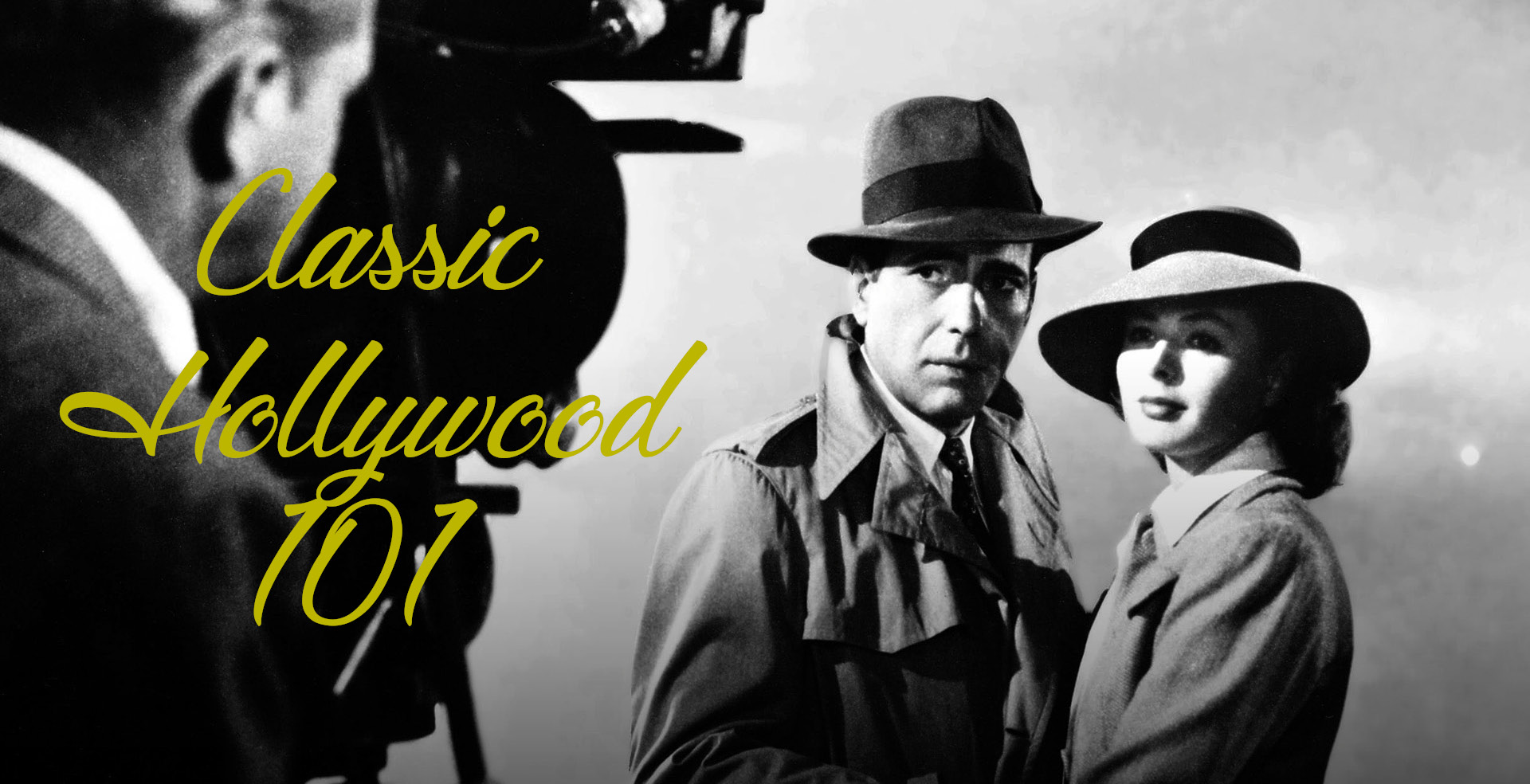 Class is back in session.

Hopefully you were able to watch at least one silent film from last week's assignment. Some people even got ambitious and watched the whole list. That's the spirit!

The concept here is simple: every week you pick from a list of films and by the end of the year, you'll have gotten a survey of the entirety of film history. Your homework is to watch movies. Simple!

This is most effective if you watch one (or more!) of the films each week and write a short review of it on Letterboxd. Why the short review? A work of art will stick with you longer if you force yourself to reflect on it, even if for only a few minutes, before you move on to another episode of The Office.

We continue our journey with the early days of Classic Hollywood and the Studio System.

It's easy to think of the transition to "talkies" going smoothly, but there was a lot of collateral damage along the way. The Silent Film Era had been very successful for a lot of people. Legends like Charlie Chaplin were very resistant to change and it's become cliche to point out people who thought the talkies would just be this fad. Spoiler: they weren't.

The Jazz Singer was the first talkie and it was a huge success. People saw this in the theaters and lost their minds.

It was a big deal.

A lot of these early talkies were adapted from plays, for obvious reasons.

For some actors, this opened up a whole new avenue, especially those trained on the stage, like John Barrymore. For other actors, it was a major problem.

Studios weren't always sure how things would go. They thought Greta Garbo's accent would make her Dead on Arrival in talkies, but instead she flourished.

If there's one common thread in the history of cinema, it's that the Studio is usually wrong. But as Ninotchka would tell you, they owned the Means of Production.

In those days, actors were employed directly by the studio and the studio controlled everything. If you worked for MGM, you did whatever pictures MGM wanted you to do. They could loan you out to other studios as needed. They could control your entire image, including the public aspects of your romantic life. Just ask Rock Hudson.

What made this system really lucrative for the studios is that they also owned theater chains. The studios would sell pictures in sets called "block booking", where in order to get the hit film with the A-listers, you had to purchase it along with a bunch of other films that probably weren't any good. Of course, if the studio owned the theater, the theater didn't have to buy the block. If you're thinking this sounds like a monopoly, you're right. The system was shut down by the Supreme Court in 1948.

But that Golden Age of Hollywood led to some fantastic films.

The breakup of the Studio System forced the studios to scale back operations drastically, opening the door for stars to write their own tickets and the introduction of the independent filmmaker.

You can't go wrong with any of this week's films, as they're all classics that appeal to a broad audience. Watch them all!

The Shop Around the Corner
(1940 | Ernst Lubitsch)

If you watch this, you'll spend a good chunk of it wondering if you've seen it before. You're thinking of You've Got Mail, that Tom Hanks and Meg Ryan romantic comedy from the 90s. Of course, the original is better.

Jimmy Stewart and Margaret Sullavan play co-workers who can't stand each other but--SPOILER ALERT!!!--end up falling in love.

German-born Ernst Lubitsch was one of the first Hollywood directors of the classic Hollywood era to become something of a brand name. His sophisticated comedies were so consistently good that his directorial style became known as "The Lubitsch Touch".

The great Billy Wilder (Some Like It Hot) had a sign in his office that said "How would Lubitsch do it?"

Often imitated, never duplicated, His Girl Friday features some of the fastest dialogue in the history of film, clocking in at 240 words per minute. Based on the play "The Front Page", Hawks stumbled upon the idea of making the reporter a  woman, which opened the story up tremendously.

Rosalind Russell plays Cary Grant's ex-wife and ace reporter who's found a new man and is giving up the newspaper business.

This is one of the first films to experiment with over-lapping dialogue, a technique that Robert Altman (M*A*S*H) later perfected.

Instead of using one boom microphone, Hawks had an early multi-microphone system set up that required someone to switch them on and off during the scene as different people started talking. And you think your job is stressful.

Thanks to the Production Code, films of this era couldn't show affairs, so a common approach was to have a married couple get divorced, then find they actually loved each other after all, and get remarried.

The Philadelphia Story is based on a play that was written specifically for Katherine Hepburn. Hepburn's career was in trouble and with the help of Howard Hughes, she was able to bring this to the screen to jump-start her comeback.

From Farran Smith Nehme's fantastic essay for the Criterion Collection:

When The Philadelphia Story opened on Broadway in 1939, it ran for over four hundred performances and a couple of hundred more on tour, and thanks to a canny contract, Hepburn reaped almost half the profits. The film rights to the play were a gift to her from Howard Hughes, her beau at the time, and Hepburn refused to sell them to anyone who didn’t want her in the bargain. In the end, MGM head Louis B. Mayer agreed to Hepburn’s terms and handed over the breathtaking sum of $250,000, almost $4.5 million in today’s money: $175,000 for the play’s rights, $75,000 for her services as star. (Producer David O. Selznick had ponied up $50,000 for the massive international best seller Rebecca just a couple of years before—and people told him he’d overpaid.)

Humphrey Bogart plays detective Sam Spade in this, one of the first and most well-known film noirs. Spade, of course, is the template for private eyes.

But it's not just Bogart. Peter Lorre and Sydney Greenstreet give arresting performances. It's also the directorial debut of John Huston ( The Treasure of the Sierra Madre), one of the first great directors (and Anjelica Huston's father). It's also a captivating mystery.

To describe the plot in a linear and logical fashion is almost impossible. That doesn't matter. The movie is essentially a series of conversations punctuated by brief, violent interludes. It's all style. It isn't violence or chases, but the way the actors look, move, speak and embody their characters. Under the style is attitude: Hard men, in a hard season, in a society emerging from Depression and heading for war, are motivated by greed and capable of murder. For an hourly fee, Sam Spade will negotiate this terrain. Everything there is to know about Sam Spade is contained in the scene where Bridget asks for his help and he criticizes her performance: “You're good. It's chiefly your eyes, I think--and that throb you get in your voice when you say things like, 'be generous, Mr. Spade.' “ He always stands outside, sizing things up. Few Hollywood heroes before 1941 kept such a distance from the conventional pieties of the plot.

A satire about a successful director of comedies who wants to show everyone he can be a Serious Artist with his next project, O Brother, Where Art Thou? The studio wants him to make another comedy. So he goes undercover as a hobo, meets Veronica Lake, and learns important lessons about himself.

Richard Brody says it well for The New Yorker:

Widely considered one of the greatest scripts ever written, the writing of it was actually a mess. Three different writers are credited on the script and there were uncredited re-writes. Lines were added by Bogart and the ending line of "Louis, I think this is the beginning of a beautiful friendship." was dubbed in a month after they finished shooting.

Still, the script is wonderful. Just start to finish a collection of classic lines. If you're seeing it for the first time, you'll probably be struck by just how much of the dialogue you recognize.

This is also Humphrey Bogart as his absolute coolest.

If you had to pick one film to show someone who's resistant to old movies, this is probably the one to pick.

Written by the Epstein Brothers (Casablanca) and directed by Frank Capra (It's a Wonderful Life), Arsenic and Old Lace is an adaptation of a Broadway play. The deal was that the movie couldn't be released while the play was running. The play was a massive hit and they had to sit on the movie for 3 years.

Arsenic and Old Lace is a dark, dark comedy about Cary Grant discovering his family has...mental issues. This is Cary Grant at his most manic.

We dig into the film often considered the Greatest of All Time.